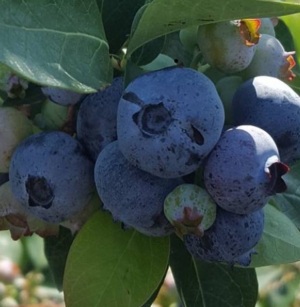 Nick grew up in Wyoming County and worked many long hours as a manager for McCormick Potato Farms. He met and married his wife of 56 years, Mary Louise “Dolly” Songer and she was the love of his life. In the mid-1960’s, they moved to Orleans County where Nick managed the apple orchards for LaMont Fruit Farms for nearly 45 years, upon retiring from LaMonts, he owned and operated Empire Orchards in Lyndonville, which at the time of planting was the largest block of Empire apples on the East Coast of the United States.

They raised two daughters, Loriann and Kathy, on the family farm where they later planted a blueberry patch. Nick successfully operated a U-pick Blueberry Market known for blueberries the size of quarters.

Nick was always willing to help a fellow farmer in need, fixing tote boxes or machinery and offered farming help in the apple orchards of the Amish Community upon their first settling in this area. His two grandsons were the apple of his eye and they have many fond memories of “Pops” antics on family vacations. Nick loved to play cards and won many games of Cribbage with his sister and games of Euchre, as a member of the Medina VFW Euchre league, never trumping his partners ace. Nick had a strong work ethic and was a devout Catholic. You could always find Nick driving his Kubota Forklift out in the orchard or gossiping with his fellow farmers over coffee.

He served his community by being a Town Board member for the Town of Ridgeway, a member of the Lyndonville Lions Club, a member of the International Dwarf Fruit Tree Association, a Fourth Degree Member of the Knights of Columbus, Medina Council #651, and a parent host for several foreign exchange students with the American Field Service.

He is predeceased by his parents George and Gertrude Kersch and his two brothers, Mark and Anthony Kersch.

Relatives and friends may call on Sunday, March 1, 2020 from 1pm - 4pm at the Bogan & Tuttle Funeral Home 226 Pearl St. Medina NY 14103. A Mass of Christian Burial will be celebrated at 11:00 AM on Monday, March 2, 2020 at Our Lady of the Lake Parish, St. Joseph’s Roman Catholic Church, 38 Lake Avenue, Lyndonville NY. Interment will follow at Sacred Heart Cemetery.

Memorials may be made in Nick’s name to the United Memorial Medical Center Foundation, 127 North St. Batavia NY14020.

Please light a candle or share a memory of Nick at: www.bogantuttlefunerals.com

To send flowers to the family or plant a tree in memory of Nicholas P. "Nick" Kersch, please visit our floral store.