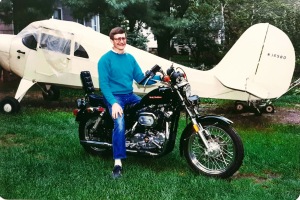 James (Jim) Frank Chizick, 77, of Lyndonville, NY, skipped church and went straight to heaven to be with the Lord on Sunday, April 26, 2020.

Born on March 5, 1943, in Detroit, MI, Jim was the son of the late James and Helen (Donitzen) Chizick. He was raised in Port Leyden, NY and attended Port Leyden Central School where he was class president, prom king, state champion basketball star, and accomplished trumpet player, graduating in 1962. He earned a Bachelor of Science in Education from SUNY College at Buffalo and then a Master of Science in Education, concentrating in special education in 1970 on a full scholarship. Jim married Joy in 1969. They settled in Lyndonville, NY and had four children. He worked as a teacher for 43 years—the first 33 as a special education teacher for 4th- 6th graders at Royalton-Hartland Central School and the next 10 as a GED instructor for Iroquois Job Corp—until his retirement in 2001.

Jim was a Renaissance man. When he wasn’t teaching, he played the trumpet, bagpipes, and harmonica; was a published poet, avid storyteller; and beekeeper. Jim was a member of the “D” Company Buffalo City Guard Gordon Highlanders, Somerset Historical Society, and a volunteer at the Niagara Celtic Festival. He chaperoned three student study tours in Europe with his wife and traveled to 13 countries. Jim’s love of Jesus was a central driving force in his life. He gave others a taste of the freedom God intended each of us to live in the midst of – the feel of the wind whipping by while holding tightly to him on the back of his motorcycle: trust; the realization of just how small we are in comparison to the wide wide world as we looked down from his airplane in the sky; the exhilaration of conquering moguls while whizzing down a diamond run, night skiing at Holiday Valley. Yates Baptist Church counted him as a deacon, trustee, award-winning youth leader, and church van driver. His faith drove his passion for causes he believed in, supporting through time and treasure many organizations that served those in need, such as Care Net of Orleans County, FoodLink, and Lockport Cares.

Jim was a Co-Laborer in Messiah (CLIM) for Jews for Jesus, traveling to Toronto, Key West, Boston, Pittsburgh, Chicago, and New York City to build relationships across religious lines. He was on the prayer team for Kingdom Bound for many summers. He enjoyed time at the Lighthouse Christian Camp and traveling with the Barker Seniors. His favorite response to his Job Corps students asking, “Hey, Mr. Chizick! What’s up?” would be, “Heaven. What’s down?” and then pause before adding, “Don’t go there!” Jim got excited about life, and he shared that enthusiasm with others. As he engaged you in conversation, he animatedly held your attention until you were ready to go along with him for whatever adventure lay ahead.

Jim skied, rode motorcycles, drove fast cars and parachuted out of airplanes. He built model airplanes, full-sized gliders and refurbished an Aeronca Chief he named Amazing Grace. Jim flew all those as well as gyrocopters and ultralights. And he took others with him. Youth, family, friends—all were invited to ski, ride, fly. Jim ran a chapter of the Experimental Aircraft Association’s Young Eagles Program, where he exposed over 100 elementary students to the joy of flying, changing perspectives on the world and life in general. When his special education students weren’t allowed to participate on school field trips, he took it upon himself to create trips to the airstrip and brought his motorcycle to school, just for them. He coached for the American Youth Soccer Organization (AYSO), was a leader for the 4-H Shooting Sports Club, and coached Ski Club for Lyndonville and Roy-Hart Central Schools. Jim valued time in solidarity with others. He was a member of the Patriot Guard, the ABATE Motorcycle Club, the Niagara Soaring Society, the Gaines Valley Flyers Club, the Experimental Aircraft Association, the Philadelphia Ship Preservation Guild and the National Rifle Association. Always a kid at heart, Jim could be found exploring and experimenting, creating wooden masterpieces with his jigsaw in the basement, baking peach pie until he perfected the recipe, and even practicing daily an entire summer until he could ride a unicycle. In the summers, he and his wife would take the family on multi-week trips in the motorhome to explore national parks and visit relatives as far flung as Texas.

A gentle spirit, coming alongside those in times of trouble, Jim changed the course of many lives through his counsel, coaching, and friendship. He taught others how to work through their fears, gain new perspectives, and learn how to trust. He instilled confidence, radiated humility, and poured out patience. Teens and children loved him. Jim’s in-laws called him a saint and his five sisters admired him. His wife found refuge in his embrace and his children appreciated his listening ear and wise counsel. Jim was his mother’s first-born and only son. He will be missed dearly by all whose lives he touched. But they that wait upon the Lord shall renew their strength; they shall mount up with wings as eagles. (Isaiah 40:31a, KJV) Fly high, Jim, fly high.

Besides his parents, Jim is predeceased by his sister Charlotte Mayfield and by his brothers-in-law James McHale, Robert Mayfield and Thomas Wiedrick.

Arrangements were entrusted to the Bogan & Tuttle Funeral Home, 112 N. Main St. Lyndonville, NY 14098. Please light a candle or share a memory of Jim at : www.bogantuttlefunerals.com

To send flowers to the family or plant a tree in memory of James Frank Chizick, please visit our floral store.