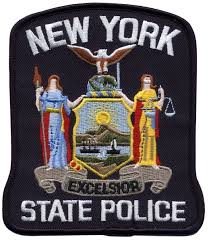 To know Doug was to love him, and by his tremendous, yet gentle influence, he headed the big family that was so integral to his life.

Born on October 9, 1938 in Amery, WI, he was the son of the late Floyd and Violet (Olufson) Rue. Doug attended school in Wisconsin and Minnesota, and then in 1956, he enlisted in the U.S. Navy. Following an honorable Navy discharge, he moved to New York and served in the New York State Police from 1962 to 1982. Following his retirement from the police, Doug owned and operated the Villager Locksmith and Alarm, invented the Sump Alert, installed locks and alarms for Best Lock and Security, and served as Code Enforcement Officer for the Village of Medina, and the Towns of Ridgeway, Yates and the Village of Lyndonville.

Doug was a man of many talents. In his youth, he was a member of the Clowns International and was a trampoline artist. He held a multi engine, commercial pilot license and flew again at the age of 80! He had a quick wit, great sense of humor and loved to tell stories and was the master in the art of bargaining. Doug was a longtime member of the St. Peter’s Lutheran Church, where he taught Sunday school, served as Church Council President, sang in the choir and helped in establishing the Medina Food Pantry. He loved to sing at special family celebrations, often including Kevin Clark at the piano. In his retirement years, he could be found in the morning at Rudy’s “Round Table”. He was an avid reader, enjoyed police shows and watching movies with his dog on his lap.

Besides his parents, Doug is predeceased by a son, Michael Rue.

There are no calling hours. A Celebration of Life Service will be held at 11:00 AM on Friday May 28Th at St. Peter Evangelical Lutheran Church, 1355 West Ave, Medina, NY 14103. Burial will be private for the family at the Western New York National Cemetery, Corfu, NY.

Arrangements were entrusted to the Bogan & Tuttle Funeral Home, 226 Pearl St. Medina, NY 14103. Please light a candle or share a memory of Doug at: www.bogantuttlefunerals.com

To send flowers to the family or plant a tree in memory of Douglas E. Rue, please visit our floral store.